She was born on 30th December 1867, in the village of Lipowa near Kobryń, Belarus. She was an actress, theatre director and teacher.

Her stage début came on 8th October 1887, when she played Helenka in the play “Dziwak” performed on stage of the Helena Modrzejewska National Stary Theatre in Kraków. Wanda Siemaszkowa worked for that theatre for six consecutive theatrical seasons, with only one longer break between 1891 and 1892. In the years 1893-1894, she worked as an actress for a theatre in Lviv. After that, she returned to Kraków and worked for a local theatre. Then, in the years 1897-1905, she performed on stages of theatres in Warsaw, Kraków and once again in Lviv. In 1905, she created her own theatre group with which she travelled to Vilnius, Grodno and Kaunas to perform. In 1906, she returned to work for the theatre in Lviv, while at the same time she also gave performances in plays staged in theatres in Vienna (1910) and Paris (1913). In 1914, she did a tour as a reciter, during which she visited Vienna, Praha, Tabor and Berlin. In the years 1918-1920, she was part of a touring group, with which she gave performance in such places as Częstochowa, Sosnowiec, Płocek and Włocławek.

In the autumn of 1920, she assumed the position of the director of the Municipal Theatre of Bydgoszcz. She signed a 5-year employment contract with the then appointed president of the city. She inaugurated her first theatrical season (1920-1921) in Bydgoszcz with the play “Kościuszko pod Racławicami” written by Władysław Ludwik Anczyc. Later on, the theatre’s repertoire expanded to include stage plays written by: Adam Mickiewicz, Juliusz Słowacki, Stanisław Wyspiański or William Shakespeare.

It fell on Wanda Siemaszkowa to lead the Municipal Theatre of Bydgoszcz in the difficult period of an economic crisis and the post-war reality, when Polish cities were only rebuilding as part of the new independent country. It brought about many changes in the structure of the population, with the German populace replaced with new immigrant population that came to settle in Bydgoszcz. That was precisely the reason why the ambitious offer presented by the theatre led by Wanda Siemaszkowa was not popular with the audiences. Two years later, she resigned as the director of the theatre, with the approval of the municipality.

In 1921, the actress established the so-called Dom Aktora (a centre for elderly actors) located at ul. Gdańska 164, and the first Drama School ever established in Bydgoszcz, where she also taught. The School lasted only until 1922, when Wanda Siemaszkowa decided to leave Bydgoszcz.

After that, she gave guest performances in Warsaw, Vilnius and Lviv. In the years 1924-1926, she travelled to the USA and gave guest performances. She returned to Poland in 1926 and then performed on stage of the Municipal Theatre in Grudziądz. In the season 1930-1931, she was the director of Teatr Popularny im. Bogusławskiego in Poznań. She continued to perform on theatre stages in Lviv and at the Polish Theatre in Katowice, until the outbreak of the Second World War. In 1945, she became the director of Teatr Ziemi Rzeszowskiej in Rzeszów and held that position until her death.

Wanda Siemaszkowa also had three films roles. The first one came in 1924, in the film “Śmierć za życie. Symfonia ludzkośc”  directed by Jan Kucharski, in which played a demented innkeeper. Still in 1924, she played Mrs. Romanowa in the silent film “O czym się nie mówi” directed by Edward Puchalski. Unfortunately, the film has not been preserved to this day. Her final film role came in 1938, in the film ,,Za zasłoną” / “Behind the Curtain” directed by Tadeusz Chrzanowski.

Wanda Siemaszkowa died on 6th August 1947, at the manor-house of Maria Konopnicka in Żarnowiec. She was interred in the family vault at Powązki Cemetery. One of the dramatic theatre in Rzeszów has been named after her. 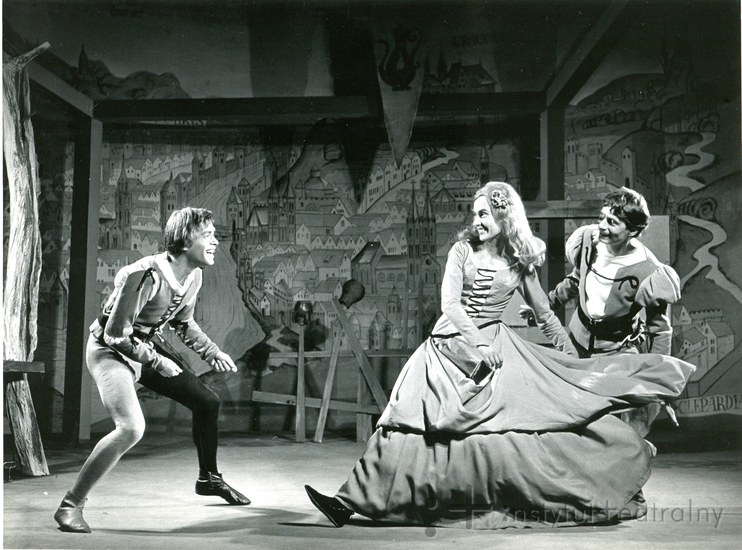