The film by Jacek Bławut portrays a group of retired actors living in an old people’s home in Skolimów, who are offered an opportunity to play a role, for the very-last time in the lives.

This opportunity comes from Jerzy, a cinema and theatre star (played by Jan Nowicki), who arrives in Skolimów to convalesce.  He is an incurable eccentric, who disrupts the stable life of the home residents. All the moreso because he talks them into putting on Faust by Goethe. At the same time, he is flirting with Małgorzata, a voluptuous woman (Sonia Bohosiewicz) working at the home.

The film combines fiction and reality in a masterly fashion. Although the idea of staging Goethe’s Faust was invented for the purposes of the script, the old people’s home in Skolimów does exist.

The afore-mentioned great personalities of Polish cinema play themselves in the film.

“Okrąglak” in Toruń “plays” in a film again

In the scene of a stage performance in a prison, we see actual prisoners, who at the time were serving their sentences in the “Okrąglak”, rotunda-shaped prison in Toruń.

Jeszcze nie wieczór / Not even the evening 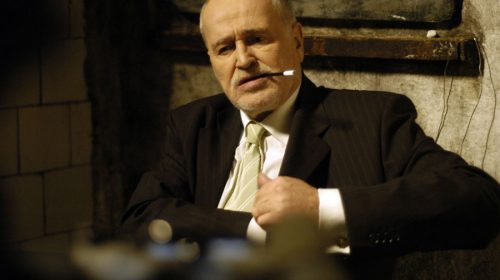