Trędowata is a film based on the novel written by Helena Mniszkówna.

This is a story about the tragic love affair between aristocrat and entailer Waldemar Michorowski and an impoverished noble woman and governess Stefcia Rudecka. Their love affair is strongly opposed by the aristocratic community, which sees their relationship as an unacceptable misalliance.

Ostromecko has a beautiful Palace and Park Complex, which was first owned by the family of Mostowcy, and then by the Alvensleben family, until the end of WWII.
Trędowata was filmed in the interiors of the Old Palace from the 18th Century, built for the family of Mostowscy, in the Rococo style.
It is one of the two palaces located within the premises of the Palace and Park Complex in Ostromecko, the other being the New Palace from the 19th Century. 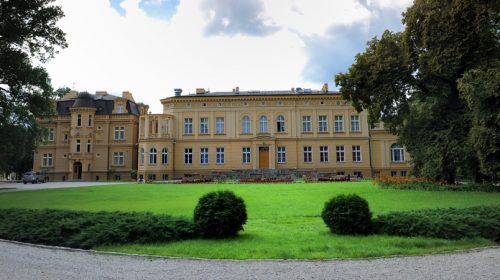