Grażyna was born on 19 September 1953 in Bydgoszcz, and spent her first seven years there, living in ul. Wyspiańskiego in the Sielanka housing complex. Then she lived in Toruń for another seven years. She is a film, stage and television actress, and has received numerous awards, including the Polish Film Award: the Eagle for Best Actress in a Leading Role for her performance in Pan Tadeusz/Pan Tadeusz: the Last Foray in Lithuania, directed by Andrzej Wajda. She has created unforgettable screen characters in films made by illustrious Polish directors, such as Krótki film o miłości/A Short Film About Love, by Krzysztof Kieślowski, Magnat/The Magnate by Filip Bajon, and Przez dotyk/By Touch (in Kronika przypadków/Chronicle of Accidents), by Magdalena Łazarkiewicz.  In the first years of her artistic career, the focus was primarily on her beauty, which consequently made her the leading belle of the Polish cinema.

As early as during her high school years, she already knew she wanted to become an actress. And she succeeded – at the age of 19, immediately after graduating from high school, and without any special training, she performed at the Wrocław Pantomime Theatre. She made her debut in a pantomime play based on Legenda/Legend by Wyspiański. In 1977, she graduated from the National Higher School of Theatre in Warsaw (currently the Aleksander Zelwerowicz National Academy of Dramatic Art in Warsaw), where she was instructed by Andrzej Łapicki, Tadeusz Łomnicki, and many other professors. Between 1977 and 1984, she performed at the National Theatre in Warsaw, under the direction of Adam Hanuszkiewicz.

Her television debut came in 1974, when she appeared in a novella television film entitled Najważniejszy dzień życia/The Most Important Day in your Life, directed by Sylwester Szyszko (in the episode Telefon/Telephone); however, it was not until one year later that her name was included in the credits for the first time – in a television series entitled 40-latek/A Forty-Year-Old, in which she played the bit part of Urszula Nowowiejska, an engineer.

Her first feature film was a Polish-Yugoslavian feature, Zapach ziemi/The Scent of the Earth, directed by Dragovan Jovanovic in 1978, where Ms Szapołowska played the wife of the protagonist. The film is a poetic ballad about a peasant, who, having suffered tragic blows of fate, loses every single thing he treasures the most, and eventually finds the strength to face the adversities, stemming from his inner passion for life.

The early 1980s saw a dramatic development in her career. In 1982 alone, she starred in four motion pictures, two of which turned her into a real star: Wielki Szu/Big Shar by Sylwester Chęciński, in which she appeared as the wife of the eponymous Big Shar, played by Jan Nowicki (from Kowal in the Kuyavia region). Her second breakthrough was the leading role of a singer, Liza, in Lata dwudzieste… lata trzydzieste…/The Twenties, the Thirties, directed by Janusz Rzeszewski. In the same year, she also appeared in Fort XIII by Grzegorz Królikiewicz and Nadzór/Custody by Wiesław Saniewski, in which she played the very psychologically complex role of Kinga, a prison officer.

The first performance by Grażyna  Szapołowska to find critical acclaim was her role in the episode entitled Przez dotyk/By Touch – part of the novella cycle Kronika wypadków/A Chronicle of Accidents – directed in 1985 by Magdalena Łazarkiewicz (première in 1986). According to the critics, Szapołowska and her co-star, Maria Ciunelis, created touching, credible, characters. For her performance, Ms Szapołowska received the award for the best female role at The Youth and Film – the Festival of Film Debuts in Koszalin, and also the Złoty Ekran (Golden Screen) Award for the best screen character, given by the Ekran periodical.

In 1988, she appeared again in a Krzysztof Kieślowski film, and created one of the most-crucial roles in her career, by playing Magda in Dekalog VI – Krótki film o miłości/Decalogue, Six – a Short Film About Love. She created a psychologically deep portrait of a woman who takes too long to notice the tragedy of a young man who is in love with her. For her performance, Szapołowska received the Bronze Lions Award for Best Actress in a Leading Role at the Gdynia Film Festival, and also the Silver Hugo Award at the Chicago International Film Festival. The picture itself received numerous accolades both in Poland and abroad, including the Golden and Silver Lions of Gdańsk, and many awards in San Sebastian, São Paulo, and Geneva. In 1989, Szapołowska appeared in a film directed by another master of the Polish cinema, Tadeusz Konwicki – Lawa/Lava – in which she played the role of the Guardian Angel and the Archangel. In 1990, she portrayed Ms. Grażyna in Seszele/The Seychelles, directed by a Toruń native, Bogusław Linda, and also the Stranger in the Polish-Russian picture Piękna nieznajoma/A Beautiful Stranger, directed by Jerzy Hoffman.

For her superb performance as Telimena in the screen adaptation of Pan Tadeusz/Pan Tadeusz: the Last Foray in Lithuania, by Wajda, in 1999, Szapołowska received numerous awards, including the Polish Film Award: the Eagle for Best Actress in a Leading Role.

Ms Szapołowska has also enjoyed great success in the foreign film industry. Her international debut was the previously mentioned feature film Zapach ziemi/The Scent of the Earth. After that, she played in Hungarian, Russian, German, and Italian productions. The list of her roles in foreign pictures is long.

In the 2010s, she starred in Polish blockbuster feature films and various television series – in the soap opera by Maciej Dejczer entitled Magda M. (2005–2006), and in romantic comedies. In Tylko mnie kochaj/Just Love Me, by Ryszard Zatorski, Nie kłam, kochanie/Don’t Lie, Darling, by Piotr Wereśniak, Wojna żeńsko-męska/The Male-Female War, by Łukasz Palkowski (2011), and Pokaż kotku co masz w środku/Kitty, show me what you have inside, by Sławomir Kryński (2011). She also performed in Listy do M. 3/Letters to Santa 3, directed by Tomasz Konecki (2017), and in Botoks/Botox, directed by Patryk Vega (2017).

In the meantime, she also appeared in foreign pictures such as Polnische Ostern by Jakob Ziemnicki, and Run Boy Run by Pepe Danquart – a harrowing World-War-Two story about an 8-year-old boy, who was the only person from his seven-member family to manage to escape from the Warsaw Ghetto to the Kampinos Forest.

She also starred in a 2014 film directed by her daughter, Katarzyna Jungowska, entitled Piąte. Nie odchodź!/Fifth. Do not go!, alongside Michalina Olszańska, Łukasz Simlat, and Daniel Olbrychski. Her most-recent performance in a feature film was the role of the protagonist’s mother in Miłość w mieście ogrodów/Love in the City of Gardens, directed by the famous cinematographer Adam Sikora, and Ingmar Villquist (2017) – a multifaceted and intriguing story about human passions, ambitions, and dreams.

The Golden Duck Award for Best Polish Actress; The Lubusz Film Summer in Łagów – the Star of the Film Season title; the Koszalin Meeting of Cinema Youth and Film – the Jantar Award for the screen character in Przez dotyk/By Touch; the Złoty Ekran (The Golden Screen) Award, given by the Ekran periodical, for her performance in Przez dotyk/By Touch; the Gdynia Film Festival – the Bronze Lions of Gdańsk for Best Actress in a Leading Role in Krótki film o miłości/A Short Film About Love; the Chicago International Film Festival – the Silver Hugo; the Polish Film Award: the Eagle for Best Actress in a Leading Role in Pan Tadeusz/Pan Tadeusz: the Last Foray in Lithuania; “Katarzynka” (a plaque in the shape of a Toruń gingerbread) in the Boulevard of Stars in Toruń; the Zielona Góra Film and Theatre Festival – the Clapperboard Award for lifetime artistic achievements in film, etc. 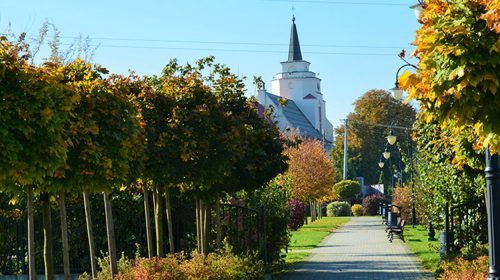