Prawo i pięść/The Law and the Fis is a unique piece of cinema in the history of Polish film, directed in 1964, by Jerzy Hoffman and Krzysztof Skórzewski.
It is commonly referred to as “the first Polish western.” The action in the film does resemble films about cowboys made in the USA, although it is not set in the Wild West, but takes place in the so-called “Recovered Territories” in Poland, in 1945.
The main protagonist is portrayed by Gustaw Holoubek, who plays the “only just man”, which makes him the equivalent of a sheriff from the Wild West.

In addition to the excellent script based on a novel by Józef Hen, and a superb performance by Gustaw Holoubek, the film features a number of other outstanding Polish actors, for example Wiesław Gołas, Ryszard Pietruski, and Zdzisław Maklakiewicz.

Most of the shoots in the film were in the New-Town Market and the streets stretching away from it, especially ul. Ślusarska. The film was also shot on ul. Podmurna, Ciasna, and Mostowa.

In the New-Town Market, the municipal authorities in Toruń unveiled a special installation commemorating the film, i.e. the so-called “Pushcart of a Repatriate,” designed by Karol Furyk and Małgorzata Więcławska from Autorska Pracownia Form Przestrzennych (The Studio of Original Spatial Forms) in Poznań, and renovated an old poster pillar. The pillar was covered with full-size photos from The Law and the Fist. The pillar stands in the same place as the poster pillar we can see in the skirmish scene between “the sheriff” and looters.

Prawo i pięść / The Law and the Fist 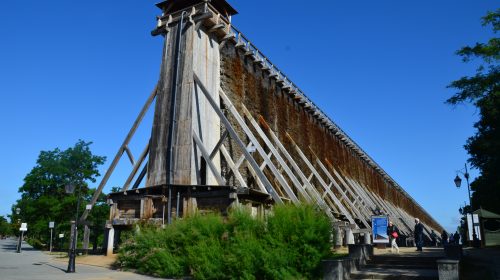