This renowned composer, conductor, musical writer, and teacher, was born in Grudziądz in 1923.

Henryk Czyż spent his late childhood and early adult years in Vilnius. During World War II, he was a soldier of Armia Krajowa (the Home Army). After participating in Operation “Burza” (“Tempest”), during which Armia Krajowa seized control of Vilnius in 1944, he was arrested by the Soviet NKVD, and, together with thousands of other Polish War heroes, interned in a camp in Kaluga. He returned from exile in 1946, and began studying law and philosophy at the Nicolaus Copernicus University in Toruń, as well as learning composition and conducting at the Academy of Music in Poznań.

His outstanding albums, recorded for the largest labels, received many international accolades and awards. He conducted many orchestras, both in Poland and abroad. In 1957, he became the Artistic Director and First Conductor of the Philharmonic in Łódź. He was in charge of this institution until 1960. In the meantime, he also composed popular music (using the pseudonym “Kaszczyc” for a certain period of time), for instance for the Polish Radio Orchestra in Łódź, under the direction of Henryk Debich. In the years 1961–1962, he was the Director of the Grand Theatre in Warsaw. He also worked as the Artistic Director and First Conductor of the Kraków Philharmonic between 1963 and 1967. He gave multiple concerts in Poland, Europe, and both Americas. He performed with the best orchestras, for instance the National Orchestra of the French Radio and Television Office in Paris and the Berlin Philharmonic, as well as philharmonic orchestras in Moscow, Leningrad, Stockholm, Zagreb, Madrid, Lisbon, Prague and Budapest. He was a close collaborator of Krzysztof Penderecki, and prepared the first performances of his famous works. Henryk Czyż composed the scores for both feature and documentary films, such as Inspekcja Pana Anatola/The Inspection of Mr. Anatol, directed by Jan Rybkowski, two pictures by Tadeusz Chmielewski entitled Ewa chce spać/Ewa Wants to Sleep and Walet Pikowy/Jack of Spades, as well as a drama film Celuloza/Cellulose (1953) by Jerzy Kawalerowicz, the majority of which was filmed in Włocławek.

He also created the soundtrack to the iconic film by Wojciech Jerzy Has entitled Rękopis znaleziony w Saragossie/The Saragossa Manuscript.

Czyż died on 16 January 2003 in Warsaw and was interred at the Powązki Military Cemetery.

The Gold Cross of Merit; the Knight’s Cross of the Order of Polonia Restituta; the Orpheus Award for the finest artistic achievement in the Warsaw Autumn Festival; the Grand Prix du Disque and the Edison Music Award for the recording of Pasja według św. Łukasza/St. Luke’s Passion by Penderecki; the Grand Prix Mondial for the quadraphonic recording of Raj i Peri/Paradise and the Peri by Schumann, etc. 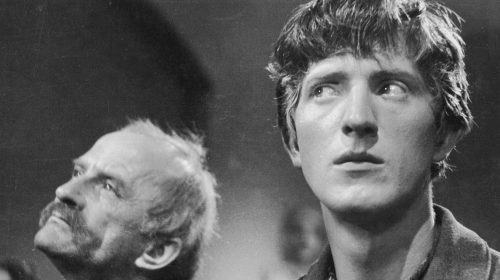